The brawler as seen by Equilibre? Snow Fall. Or Forgotten Heroes. Or Soul Snatchers. Well, I don’t know anymore, read.

Towerfall, a Ouya title, the Android kickstarted console that made more mistakes that it could affort until it vanished in thin space, was a very good game, one of the rare good games of this console. In fact, it was released on other platforms afterward, luckily.

Creating a good game like that, being a brawler, but without killing the other player, as a one man game jam during a (little) week-end, that’s the starting point of this project. At the beginning, it was called Snow Fall, dedicace to Towerfall, located in a winter landscape, with snow men, each one of them having 3 snowballs they throw at each others obviously!

First goal met: the game is fun to play and nice to watch, we even use it during a fair in the ENJMIN school, with a few gamepads and everyone is having fun. Funny how a game made in less than 48 hours by only one people can have so much in it. I’m no graphist, and the gameplay is way too close from Towerfall, so we are not going to leave it there it we want it to be a complete game that we want to publish.

Come on, everyone, who’s in? Who wants to give its feedback? At that time, one of our internship game designer want to work on this one, we let the lead (well, I confess that I like to lead everything so I don’t let everything going without giving my advice, that may be a mistake). Goals are to choose the universe, the mood, and gameplay elements that we have to add or modify to make this game a unique game.

First detour: we choose collectively to make it a small game, with 2D animations rather simple, but with characters that have each one a different power. We drop the limits on ammunitions, lower down the lifes to 1 stun point for fast games, legacy of Towerfall. Then we add teams for a strategic dimension, and avoid campers. We still won’t be able to kill opponents: hurting them means stunning them, you have to grab their body to throw it in a portal to get their soul back and earn a point (technically, you don’t kill them).

A lot of iterations and brainstorming on this first prototype, and we keep the original key point while improving the overall experience. You do not play the same way if you have a melee combat style or a distance combat style! It’s when we test those new styles that we have the idea of grouping players in team, and even teams that don’t have the same number of players in it.

Design and development of characters is starting, each one will look alike someone of the current team:

… and many more, written in the GD doc but never developped in our first prototype.

A narrative enveloppe is made, links the characters between them, so the game’s name changes (again) and will be called now Forgotten Heroes.

We have a lot of fun with this game, and to achieve a nice teaser, we write some actions to follow, recording interesting action phases. There are a lot of times where we could not stop laughing while recording those actions for the teaser, we even had bloopers of those recordings as we could not achieve to make actions right while we were laughing!

Anyway, the prototype moved forward, and we did a little assessment to estimate what was right and what needed to be changed.

We wanted to have one character = one arena, with a story (whatever it is) justifying all of this, but there was no overall consistency (you can see that in the trailer), and everyone feel it.

So we decide to retake the whole stuff and pick one and only one universe where all of them will fit.

We started to use Spine (from Esoteric) for other projects sometime ago, our artists like this kind of animation, so we start a new iteration of the game with bigger characters that have a 2D animated skeleton, and actions that take less space.

Unfortunately, our other projects take place and are the only way to finance the studio, so we can not afford putting as much effort as we could do before into that game. Two weeks before the Stunfest (a french fair for indie games), we only had a few days of active development on this game.

First day, marketing goals: how will we reach any audience, what goal can we achieve during this event?

Thankfully we have a big 4K screen and the stand that goes with it, as we bought it for a customer project a few months ago, so we send our request to get a booth at the Stunfest, one the lower ground, less visited, as our game is an early prototype (or only a game design doc should I say). We aim at having two playbale characters by that time (compared to the 4 playable characters of the previous version): the warrior and the wizard… We only will achieve making the warrior ready, the wizard will only get its animations ready but not integrated in the game.

The game universe is darker than before and we totally are confident with it: you now have to grab the soul of your opponents from their dead body, but they can try to revive their body before you are able to send their soul through the red portal. Reviving your body is a game design twist that allows players to continue playing while dead and start fresh from an empty location on the map and not above the player carrying their body like the previous version.

On the revive ability, I could write a whole article from we tested so many different solutions. The problem is:

How to do so the player which is stun can revive with a challenge simple enough to make it fun and fast, but not too simple so the player is not able to revive every time too easily. (breathe)

The first solution was to hit the button multiple times very fast to fill a gauge. Not bad, but you have to have quick fingers to win!

After multiple tries, we chose the one where there is a cursor going back and forth above the gauge and you have to hit the button while the cursor is above a colored area. The cursor starts randomly each time and the colored area is also randomly located in the gauge. And to avoid high skilled players being able to revive too instantly, the colored area size is reduced each time a player is stun until s.he loses a point.

Overall, we did well, players enjoy the gameplay and we do not have big bugs despite the few days of development. We have a booth on a public fair, and it makes the team happy! 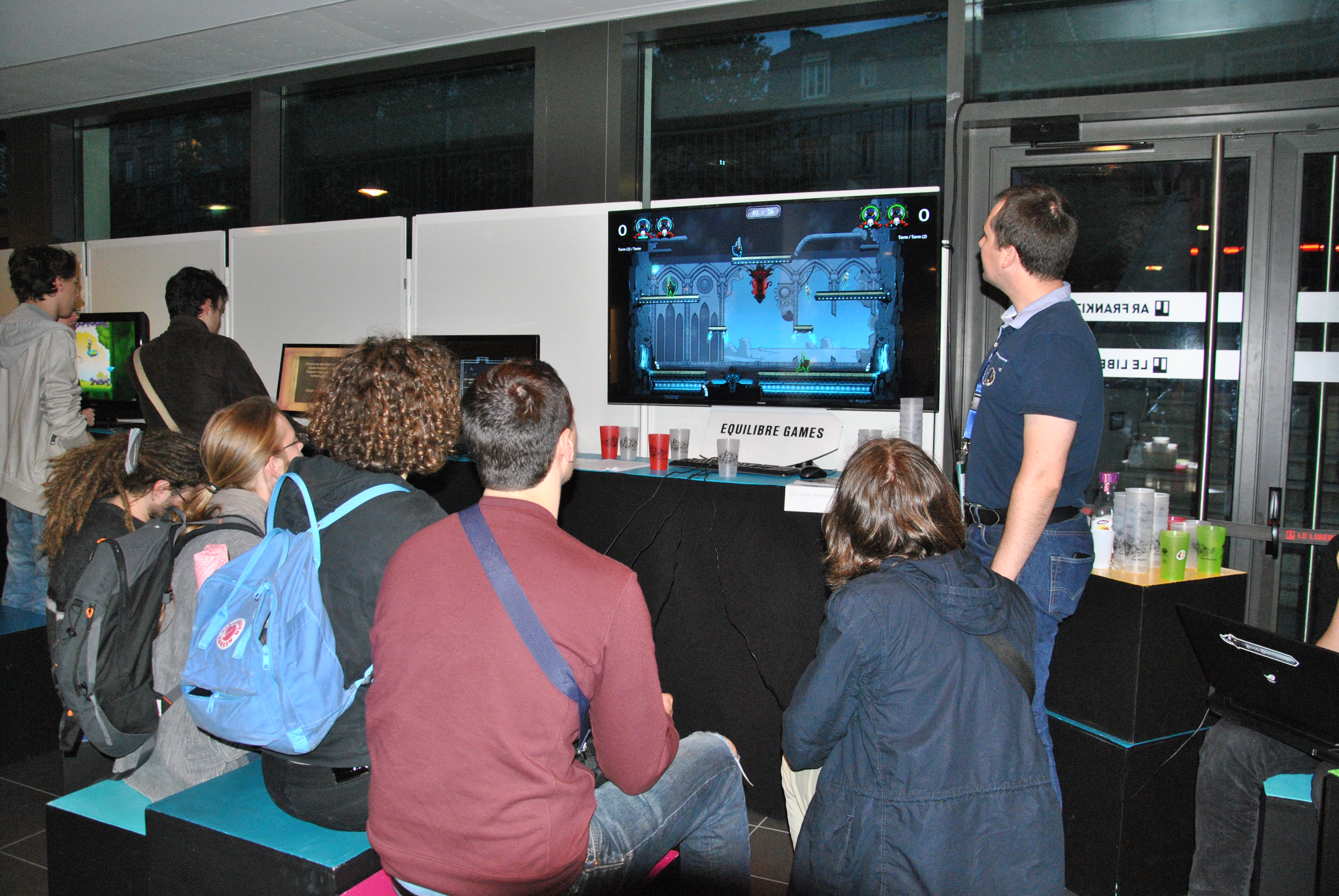 We will also go to the Gamers Assembly, with a specific box designed as a big arcade machine (useful to hide the computer in it, and also our own bags with water and candies). This will be the time we are interviewed by nolife a french (dead) tv channel on video games, with friendly journalists. 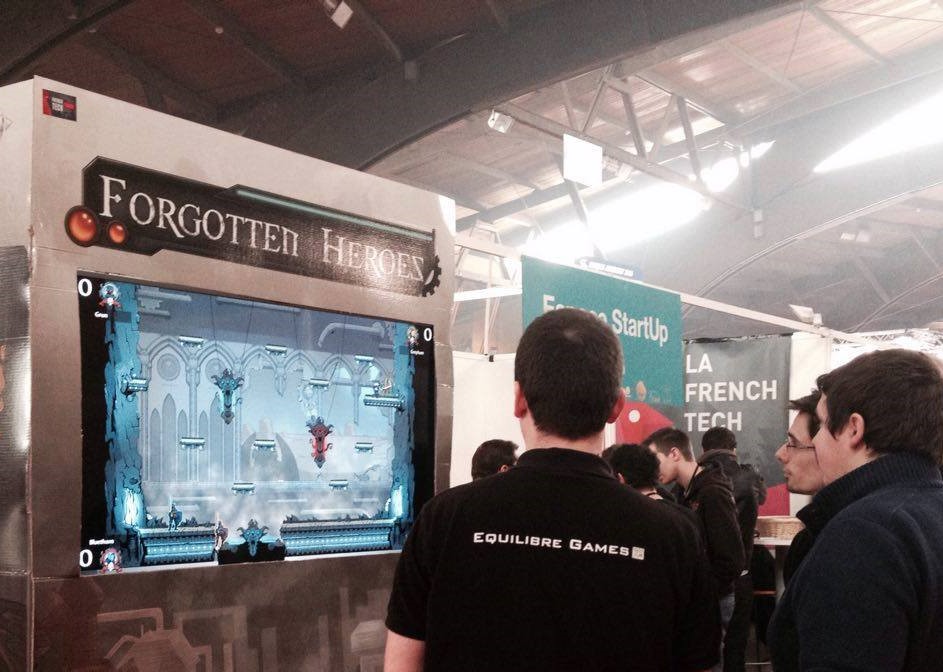 Players like the game but some issues are quite big:

The two last issues are quite simple to fix, but still present in the demo. The first one, on the opposite, is quite heavy to handle.

This is the time where we have the opportunity to develop the game fo the Xbox One so we will create a demo for the console, and some teasers for it. We had even more ambition than before, we could not stay on the original simple brawler that we started with!

A full narrative design, each character has a background story, links between them, story arcs, and there’s a secret character revealed as a final boss. We test a new teaser between us, but it won’t go public as it’s not good enough.

A little assessment? The game is better visually, better sound design, an evolved gameplay, quite an awesome job! But it makes the team falling appart: the gameplay is slower and not as easy as the previous one. The strategy part is still there but not the quick levels, some of us do not endorse this version.

We call a freelance game designer (hi Damien !) to help us step back. Indeed, he stays a whole day with us and point what we already had in mind but with clear view. He helped us focus on what is the core gameplay and let us decide which way we choose between the two ways that were facing each other in the discussion.

In a funny way, the game is described the following way:

It’s a fighting game AND a basketball game

Not what we had in mind when we started, but true after all the changes we made: team players, throwing a ball into a goal, we can understand that.

So what: is it a fighting game OR a basketball game?

We have to choose which one is the first goal of the game! New retake (yes, indeed): while developers create two distinct games (a fighting game where you can send a ball, and a basketball game where you can hit your opponents), graphists brainstorm a new artistic direction with two goals:

Multiple styles are proposed, we choose the references we like the most that fit the goal, and agree on a specific design, that will be the starting point of the new characters design, here are some of them. 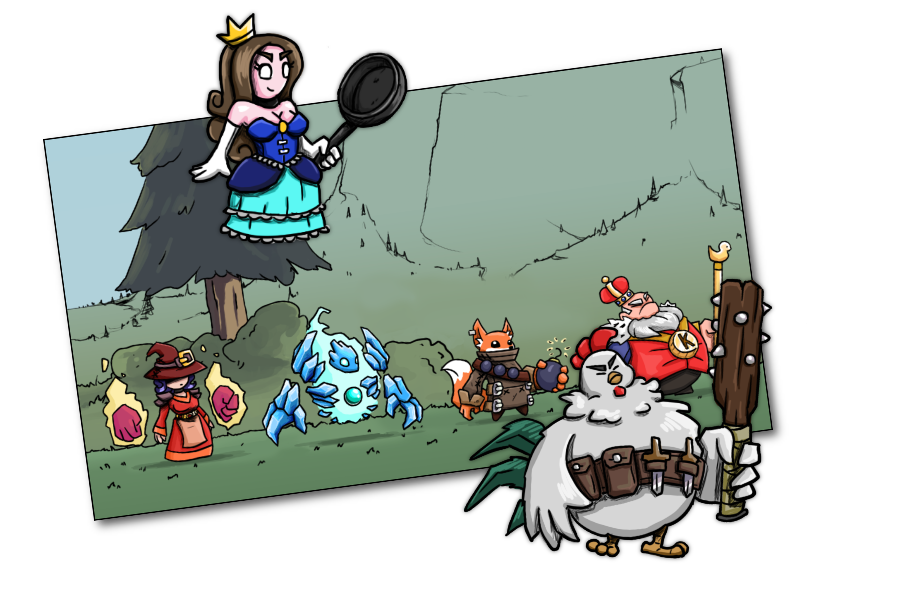 From that point, we choose one of the two prototypes and make it grow until, we hoped, a vertical slice. A few animations are drawn and integrated in the prototype of this 4th edition.

Unless… multiple external events are going to choose drastically what we work on. And this project still has a major issue: it divides the team. After the first prototype that everyone loved, we won’t have the opportunity to go through the whole latest edition of the project. The final, more strategic, faster, brighter edition of all won’t be done, as everyone is not on board. That is one true requirement to have the full team sticked together here. It would have been the flagship of the studio, should have.

This sadly is the final word for this project: division. Step back is a necessary action to make, but keeping a realistic goal with a dedicated schedule for a project is also a necessary requirement.

I create video games, started as an amateur, then created my own studio Equilibre Games and the Brand Your Game product.

Here are some stories from the past and fresh news.